We Help You Resume Operations In Shreveport After A Flood 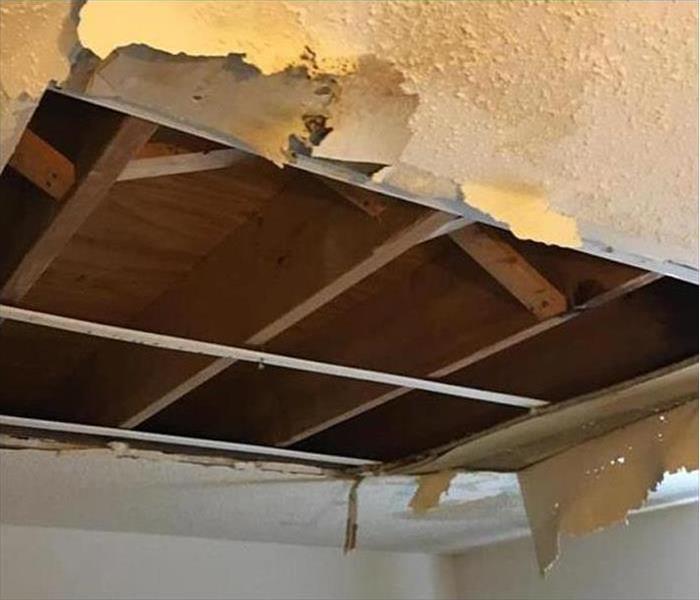 We quickly showed up to this property and punched weeping holes in the ceiling to release the water caused by flood damage.

A local Shreveport warehouse weathered an incident of commercial flood damage with minimal damage to the contents stored within thanks to quick action from SERVPRO. When the owner received a report that the roof was leaking like a sieve, he knew that quick action was the only way to minimize the losses incurred and called us immediately.

It was a unique case of commercial flood damage in Shreveport caused by a heavy rainstorm. Strong winds had blown off some roof shingles, creating an avenue for rainwater to cause havoc inside the structure. Before doing anything else, our SERVPRO technicians had to stop more water from getting into the structure. In our production trucks, we usually have access equipment such as ladders and cherry pickers, which made it easier to install roof tarps stopping rainwater from gaining access to the structure.

Apart from the tarps, we also set up plastic sheets over most of the bulky contents to stop dripping water from causing more harm. The warehouse owner was ecstatic since the heavy workload of moving items round to save them was reduced.

After stopping water from gaining access to the structure, pumping out standing water was the next crucial step. With the expansiveness of a warehouse, even 1 inch of standing water can mean a significant volume of water to move. At SERVPRO, we are equipped to handle such complicated tasks because we have truck-mounted water extractors and other high-speed pumps, which we used to complete the flood damage removal speedily.

Moisture control was another issue the warehouse owner was concerned about, especially with the fear of mold damage taking root after the incident. Our SERVPRO crews are well-versed with the aspects of moisture control, including managing heat, air movements, and humidity extraction. Knowing these aspects is not enough because it can be challenging to control them in the vastness of a warehouse. However, we have the equipment to match the challenge, including using Indirect Fired Furnaces to provide sufficient heat and DX, Direct Expansion Units, for humidity control.

To resume operations fast after flood damage is crucial for the survival of your business. Call SERVPRO of South Shreveport at (318) 865-4655 to help you. We’re Faster To Any Size Disaster.